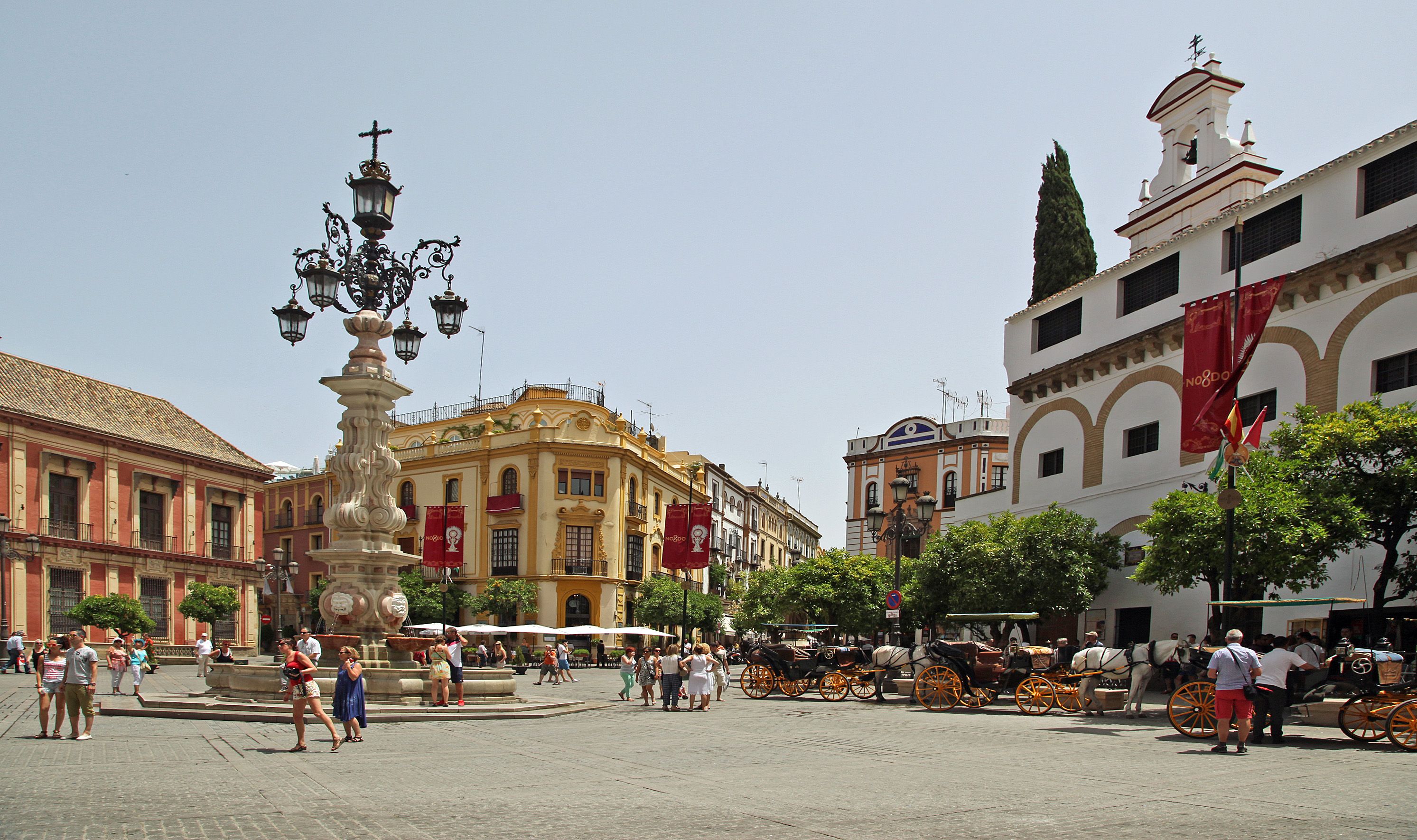 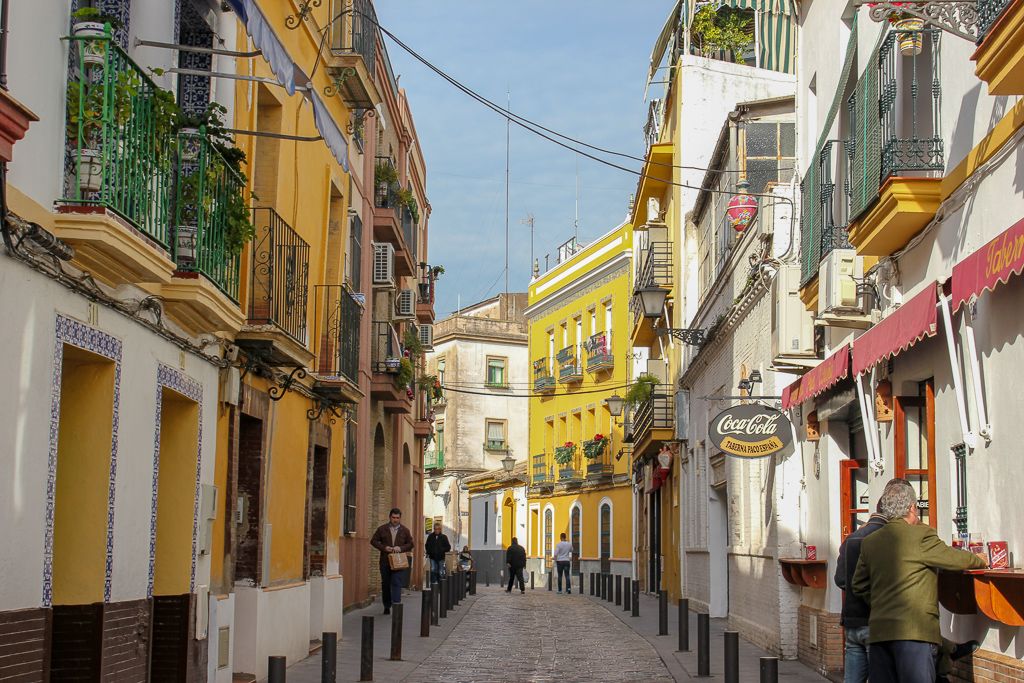 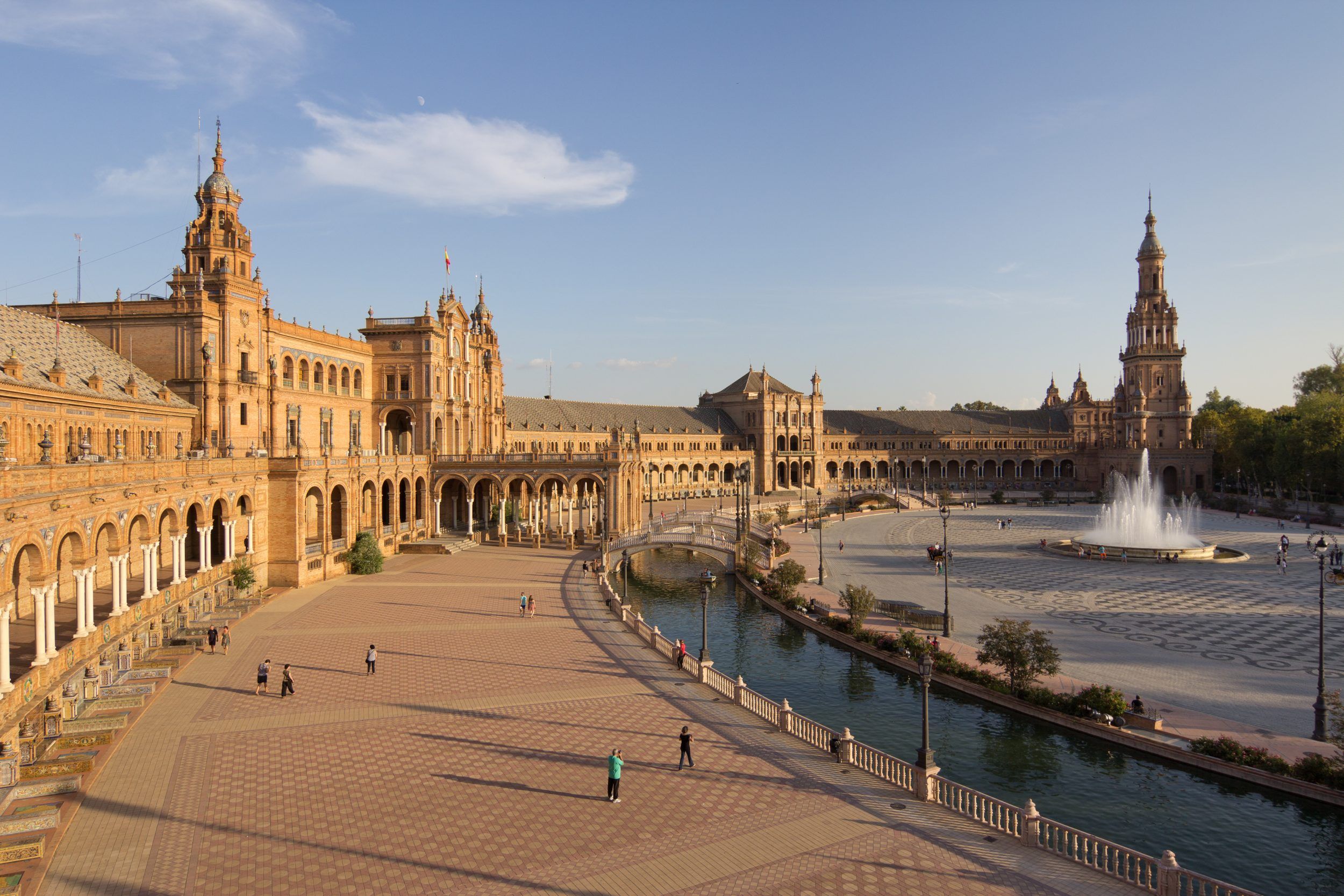 Seville the largest city in Andalusia and famous for oranges and flamenco.

Seville is situated on the lower reaches of the river Guadalquivir, in the southwest of the Iberian Peninsula

Seville's Gypsy population, known as Flamencos have made the city famous worldwide. There are more flamenco artists in Seville than anywhere else in Spain supporting the significant of tourist that visiting the city.

Spain is one of the world’s most gay-friendly country in southern Europe and while the Catholic Church is still strong here, LGBTQ acceptance in Seville is growing.

Seville’s LGBTQ scene is actually growing as the city become more recognized as a LGBTQ friendly destination. After a late-afternoon siesta, everyone hits the tapa bars for pre-dinner drink of sangria or cocktails before dinner.

If you want to explore the buzzing nightlife then La Alameda de Hércules is the area.

The EA (Special Airport, in Spanish "Especial Aeropuerto") is the only bus line that currently connects Seville Airport with the city of Seville. The service operates every day of the year, from 5.22 am to 01.00 am. The journey time is 30-35 minutes.

There is no train option. A taxi will cost around 30 euros.

The compact size of the city means that wherever you stay in Sevilla, you’re not far away from its historic centre. Seville is a safe place to explore with very low crime rates, but of course, as in any city with a lot of tourists and outsiders, it’s sensible to watch out for pickpockets.

The LGBTQ nightlife area is in La Alameda de Hércules and considered a hip, bohemian sector of the city. Embrace the night at music venues, tapas bars, clubs and gay bars, most of which are grouped around the plaza.

This is a lively place to stay in Seville, with accommodation of all types in the vicinity, including a hotel in the square itself.

Most of the gay scene in Seville is centred around the Alameda de Hércules, with a range of gay-friendly and straight-friendly bars to socialize with easy-going crowds before moving on to gay bars and clubs later on in the night.

Seville is a favourite under-the-radar gay destinations in Europe. Cheaper than the more widely known LGBTQ destination the cist has a vibrant gay nightlife scene. The Spanish are known to love to party and Seville relaxed by day spring to live at night. Flamenco for which the city of famous for is part of the reason for an active nightlife scene.

New bars and club events are popping up and thriving gay scene can be mostly be found around the Alameda de Hércules (Hercules mall), or simply La Alameda.

1987 Bar is one of the original gay bars of Seville open from Wednesday to Saturday offer fun parties, plenty of Madonna and generally good-looking boys.

ITACA is the biggest gay club in Seville offering gay anthems and the latest pop music until 5 am on weekdays and 7 am on weekends. With a fun Ancient Rome theme with dark room onsite. Popular with hot guys, a chill out VIP space and friendly bartenders. The go to place in Seville if you want to dance the night away. The club has been open 2 decades.

Men to Men is a popular raunchy cruise club. Men to Men put Seville on the international circuit of the gay masculine scene with epic lighting, wild dance floor with DJ and its community of 100% mix of young and mature, locals and visitors, bears, otters, fetish lovers and next-door masculine men.

Mentiroso is an upscale gay cafe/cocktail bar with delicious drinks and a crowd from the completed LGBTQ community. Mentiroso is a super laid-back place to hang.

Sauna Gay Hispalis is the largest biggest gay sauna in Seville, but located a little outside of the historic city centre. It generally gets crowded after work on weeknights and Sunday afternoons. Facilities include a nice jacuzzi, steam bath, dry sauna, bar, private spaces and offers some of the best male massages in Seville.

Alcázar of Seville is a royal palace built on the Abbadid Muslim residential fortress destroyed after the Christian conquest. This royal residence of the Moorish kings is an exquisite example of mudéjar architecture and lush gardens.

No visit to Seville would be completed without seeing a Flamenco show. With dancer with real passion, fire and plenty of chemistry to watch and admire their skills and music from singers.

Seville Cathedral is the world’s third largest church that stands on the site of what was a Great Mosque in the 12th century. The burial place for Christopher Columbus since 1898, this Gothic Roman Catholic cathedral is a landmark of the city. The Giralda which is the 341 feet cathedral belltower was the original minaret of the mosque.

A Seville River cruise, on the Guadalquivir River, gives you an epic view of all the cities grand monuments, admire historic bridges and you see the route taken by all the ships carrying gold docked after their world explorations.

The main two LGBTQ events in the city are Seville Gay Pride (Orgullo de Andalucía) at the end of June and the annual bear weekend GuadalkiBear which is normally in October.