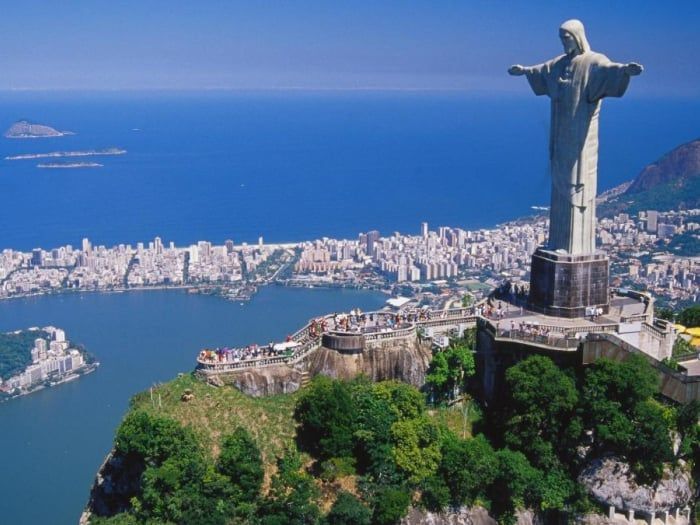 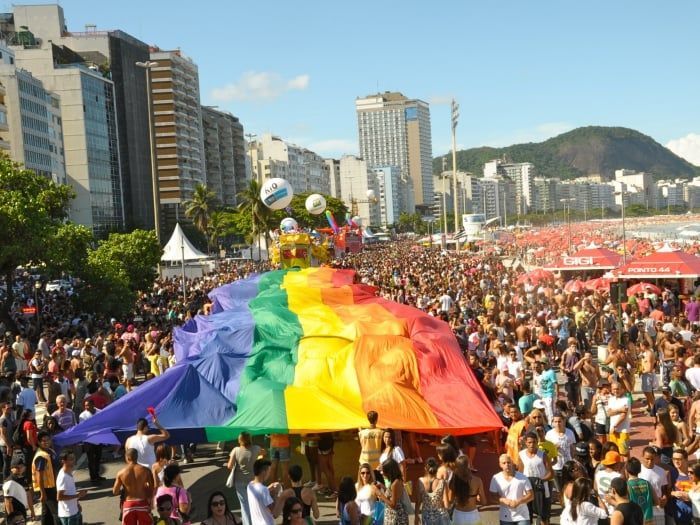 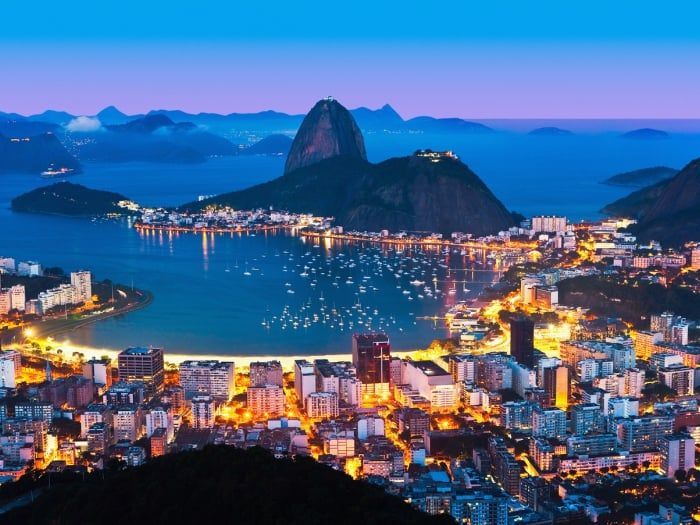 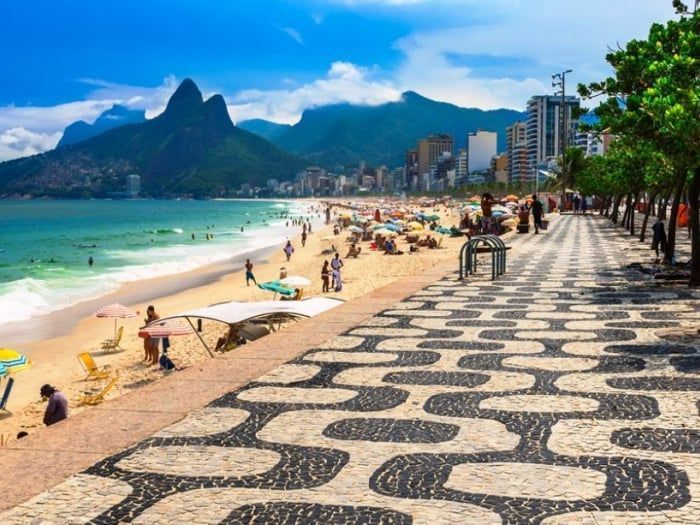 A city famous for the beaches, carnival and nightlife. The local inhabitants of Rio are called 'Cariocas' and generally friendly.

In 1822 when the War of Brazilian Independence began Rio de Janeiro subsequently served as the capital of the independent monarchy under the Empire of Brazil until 1889. In 1960 the capital was transferred to Brasília.

Rio de Janeiro is one of the most visited cities in the Southern Hemisphere. It is known for the carnival, samba, bossa nova, and famous beaches such as Barra da Tijuca, Copacabana, Ipanema, and Leblon.

In addition to the beaches there are the several worlds know famous landmarks include the giant statue of Christ the Redeemer on top of Corcovado mountain, Sugarloaf Mountain with its cable car and the Sambódromo (Sambadrome), a parade avenue which is used during Carnival.

Of course, it helps that this the city boasts one of the world's most open attitudes toward sex and sexuality including homosexuality making it a popular gay destination.

Even tourists who try to avoid the most “touristy” attractions typically cannot resist the urge to walk the sands of Ipanema while drinking a caipirinha and admiring the beautiful bronze bodies. The rich texture of gay Rio de Janeiro extends beyond the beach.

After fun in the sun on the sands of Copacabana and Ipanema, gay tourists should visit Lapa which is the bohemian area filled with cafes, restaurants and live music venues.

If you stay in zona sul close to Ipanema and Copacabana you can enjoy the beach by day and party in evening walking to majority of places.

BRT (Bus Rapid Transport) is a faster option from Galeao Airport as they use the bus lanes to reach Rio de Janeiro city centre where you can transfer to metro or take a taxi to final destination.

Rio is a city with some exclusively gay or hetero friendly bed & breakfast, guest houses or hotels as well as number of very gay friendly places to stay. It is a very popular city all year so it is always wise to book your accommodation in advance to guarantee availability and choice.

During the carnival, gay pride and New Year celebrations the city is normally sold out or only the most expensive accommodation available.

All accommodation bookable are exclusively gay, hetero friendly or gay friendly so you are assured of a warm welcome.

First time visitors to Rio de Janeiro can follow a simple formula.  Stay in zona sul (the southern zone of the city where Ipanema and Copacabana are located.) From zona sul, you can enjoy the beach by day and party hard by night at local bars and clubs.

If you are staying close to zona sul (the southern zone of the city) then you are next to Copacabana and Ipanema beach which are two of the tourist attractions. Going out around Lapa is another area recommended to tourists,

“Cristo Redentor” (Christ the Redeemer) is the number one tourist attraction in Rio is which is perched atop the 710 meter (2,330 feet) high peak of Corcovado Peak. The statue stands with arms outstretched gazing serenely out over the city. Construction of the statue began in 1922 during the heyday of the Art Deco movement, and the concrete and soapstone statue is considered the largest statue designed in this genre in the world. Most visitors take a vertical cog train to reach the base of the summit. From there, visitors to the monument once had to climb hundreds of steps to reach the top.

Sugarloaf Mountain is a monolith of quartz and granite that visitors can reach glass walled cable car known as a “bondinho” or “teleferico.” The cable car departs every 20 minutes from the base of Babilonia hill and climbs to the top of the Morro da Urca hill. From there, visitors can take a second cable car up to the mountain’s summit.

The Lagoa area is not only the most exclusive district in the affluent Zona sul district but is the third most expensive area in all of South America. It is also home to Lagoa Rodrigo de Freitas a large lagoon. Outside cafes and restaurants along the shore offer stunning views of the lagoon and the beaches beyond.

Tijuca National Park is the largest urban forest in the world and covers a huge area of a mostly mountainous landscape. Visitors can hike to Rio’s highest peak, the Pico da Tijuca, to enjoy expansive views of Guanabara Bay and the city below. Nearly destroyed in the early 1800s by encroaching coffee plantations, much of the forest was replanted by hand in the latter half of the century with as many as nine million trees. Attractions include the Mayrink Chapel and the tumbling 100-foot Cascatinha Waterfall.

Santa Teresa Neighbourhood is perched on a hill overlooking the city’s harbour and allows you to see the faded elegance of Rio’s 19th century plantation mansions and cobblestone streets. The region escaped development until 1896. The district was a haven for artists, musicians and writers in the 20th century, and although trendy clubs and boutiques have since overtaken it still retains a friendly artist colony vibe.

Rios beaches are among one of the city’s main attractions. The typical average temperature is 77/86 F (25/30C) which means they are popular most of the year.

The most famous is Copacabana with four kilometres of white sand, located in the southern zone of the city. The area in front of the Copacabana Palace hotel known as Bolsa is the gay zone.

Adjacent to Copacabana is Ipanema Beach, which is divided into a few smaller sections of the same beach that each draws different crowds. The gays are concentrated around Farme de Amoedo and this part of the beach is often called Farme Gay. Farme Gay attracts muscle men and pretty boys and the vibe is cruisier than at Copacabanas Bolsa, so it is easy to make new friends here. Beach goers will quickly notice that Rios beaches are excellent spots to find out what is happening on any given night, just grab flyers from any of the many gay party promotors who come out to the beach regularly to promote their events.

Rio’s gay nightlife can be found in the Lapa area with a few spots in the centre which is less than a 20-minute walk away. Lapa is not a gay area but a fun area to hangout. The gay parties are at Buraco da Lacraia and Sinonimo.

Anexo Lounge is a Lapa pub with good food and considered to be both gay-friendly bars and restaurants. At the weekends they often feature live performances. Address Rua do Rezende 52.

Buraco da Lacraia allows you to escape the gay tourist bubble of Copacabana and Ipanema for a truly unique Brazilian experience.  Every Friday night pay the cheap entry and have all of the beer (or soft drinks) you can drink included. If you arrive before 22.30 pm you can catch their legendary cabaret show. On the 2nd floor is the dance floor with sexy guys wearing only aprons and bow ties serving drinks. Address Rua Andre Cavalcanti 58.

Galeria Cafe is recommended on Friday nights!  Galeria gets packs with young guys and a few of their straight female friends. Music is 80’s and 90’s to more recent pop. Galeria is not very big and gets sweatier and sexier later in the evening. Address Rua Teixeira de Melo 31.

La Cueva is possibly the oldest remaining gay bar in Rio. La Cueva (Spanish for “the cave”) is located below street level and has a cavernous look and feel.  The bar has a small dance floor and popular with ursos (bears) and maduros (older guys). Address Rua Miguel Lemos 51.

As one of South Americas most gay friendly cities Rio offers a myriad of café and restaurants to choose from.

The lapa area is blessed with a multitude of places grab a quick snack, sit down for a full meal, or just stop for some coffee.

Cafeína is a small chain of cafes with the gayest is located in the heart of Ipanema by gay section of beach. Pop in for some coffee and some excellent Brazilian pastries. Address Rua Farme de Amoedo 43

Estilo da Lapa is a tiny bar/restaurant with a simple menu but popular with local gay guys.  Stop in for a beer and snack. Address Avenida Mem de Sá 127

Galitos Grill where you can get a good solid meal with a fun mixed crowd next to gay section of the beach. Try the galeto which is a type of roasted chicken. Address Rua Farme de Amoedo 62

Opium is a trendy and modern restaurant serves an excellent menu of Asian dishes. Popular with both locals and tourists. Address Rua Farme de Amoedo, 34.

Tô Nem Ai is very popular gay destination for dinner and drinks. Food is average. It’s all about the location as you are next to gay section of beach. Address Rua Farme de Amoedo, 57.

Rio is a city an open culture where a stroll along the beach can lead to a sexual conquest.  (Don’t forget prostitution is legal in Brazil.) The following list of Rio de Janeiro’s saunas and sex clubs. Most of the locations are tourist friendly but be use cautious.

Club 117 is best described as a little whorehouse. This sauna where muscular escorts solicit clients is also home to some of the city’s most popular drag and stripper performances. Address Rua Candido Mendes 117.

Meio Mundo sauna is located downtown and popular with the afterwork crowd. Stripper and drag shows on the weekend and reasonably priced guys make it popular with locals. Address Rua Teofilo Otoní 18.

Point 202 is a sauna for escorts and clients in Copacabana area and worth a visit for those looking spends some cash for a good time. Address Rua Siqueira Campos 202.

Rio G Spa is a popular spa after a day on the beach. Very few escorts normally and normally an in-shape crowd after 6 pm. Address Rua Teixeira de Melo 16

Generally, around the Ipanema beach side streets you will find some small trendy boutiques selling beach wear, t-shirts, vests, shorts, swimwear and other men’s wear.

The Rio carnival and gay pride celebrations are events that most gay travellers want to experience.

As the birthplace of Carnival, the annual Mardis Gras festival is in mid-February. The city explodes with colour, music and dancing for a week and the whole country take part in most cities.

Though Carnival is celebrated throughout the world the Rio festival is the largest and wildest celebration, drawing millions of visitors.

In early June hundreds of thousands of gays and lesbians pour into the city for Rio de Janeiro Pride. The Rio gay community began throwing pride celebrations in 1995. What makes this event unique is that it is the only pride event with a parade route that marches along three miles of beach.