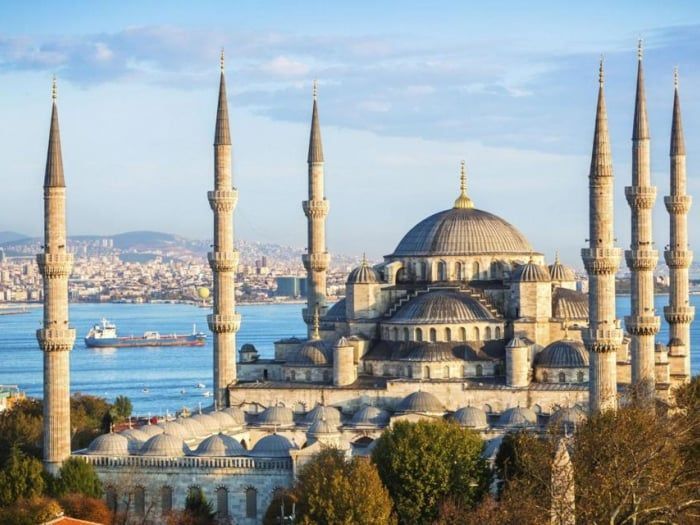 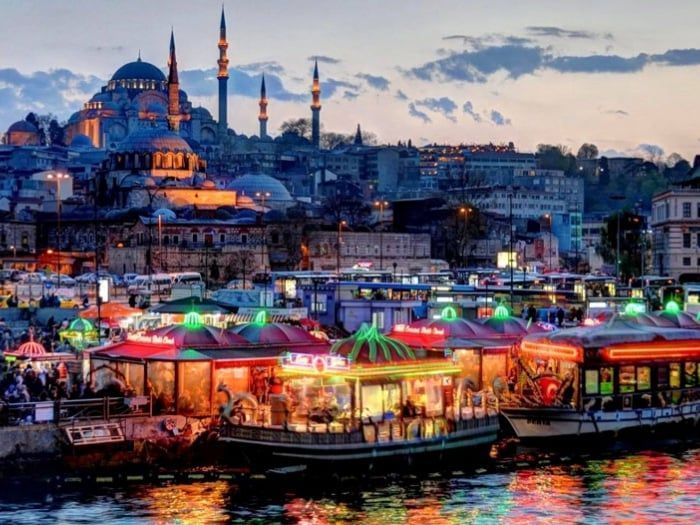 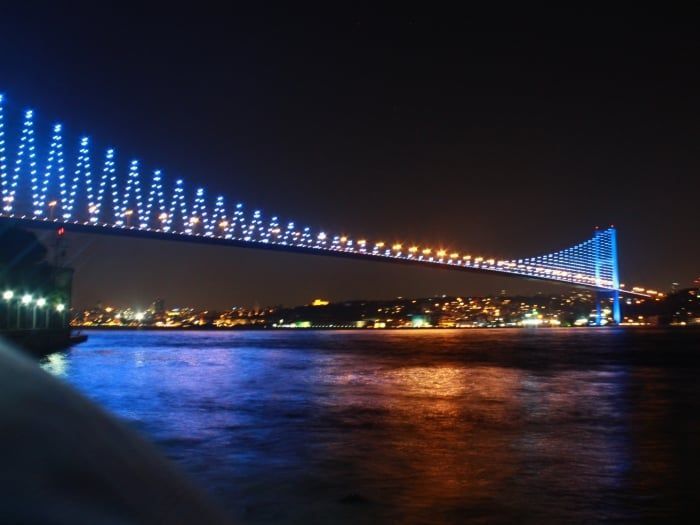 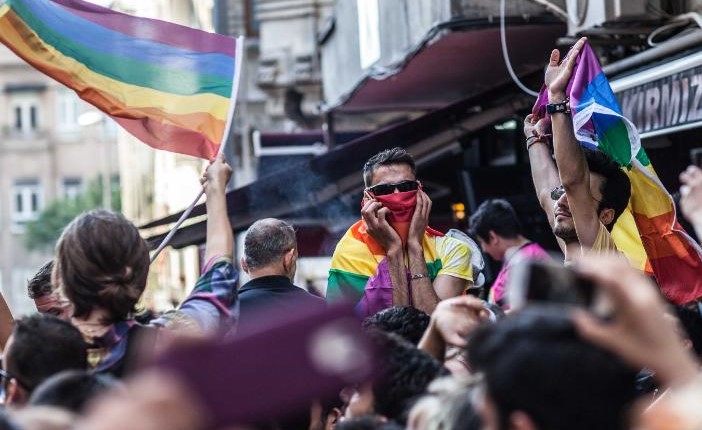 A city in the middle of Europe and Asia with a Middle Eastern flavour. A popular destination for LGBTQ community from other middle Eastern countries to visit as close by.

Istanbul was founded under the name of Constantinople. Istanbul is a transcontinental city in Eurasia as it geographically straddled between Europe and Asia. The Bosporus strait between the Sea of Marmara and the Black Sea separated the two continents. Its commercial and historical centre lies on the European side and the remainder is of the city on the Asian side.

There are bridges and ferries now which connect the two parts of the city. Istanbul's strategic position historical as a predominately Muslim country was to connect Europe to the Middle East. The population of the city has increased tenfold since the 1950s as migrants from across Anatolia have moved in and city limits have expanded to accommodate them. The population is now estimated to be approximately 15 million inhabitants.

Being the biggest and most crowded city of Turkey, Istanbul is the heart of Turkish gay life. The number of the gay venues increase in recent years and the majority are located in the Taksim district of the city on the European side of Istanbul. There are many gay bars, clubs, gay-friendly saunas and Turkish baths around Taksim.

Generally public transport in Istanbul is in the form of buses or trams. The easiest to use for tourist are the trams that take you to the main tourist attractions on the Asian side of the city. The buses can be packed and confusing to use for a foreigner who does not speak Turkish.

Taxis are everywhere but not many speak English and therefore not always the best option for first time visitors. If you are unsure of the best way to get around checking in your hotel and they will advise you on the easiest option.

Istanbul has two airports. The new Istanbul airport and Sabiha Gokcen. However, the easiest way to get from either of the airports is by the privately operated Havabus shuttles to Taksim.

The buses are available outside of the arrival lounge and you pay on the bus. They run frequently and take between 1 hour and 1.5 hours depending on the traffic which can be very busy depending on the time of day.

Taxis from the airport are generally not much faster than the Havabus and much more expensive particularly from Sabiha Gokcen airport as this is much further than Ataturk airport. There are offices after you exit immigration where you can arrange a taxi with fixed price agreed to know what the cost will be.

The majority of gay tourists whom visit Istanbul prefer to stay on the European side of the city as this is where the gay nightlife is and a more open-minded part of the city as a result.

There are a number of very gay friendly hotels in this area of the city which employ gay staff and therefore more accommodating to gay guests. All the hotels listed and bookable on our website have been visited or some our staff have stayed at these hotels so you can be assured of a friendly welcome and no issues related to your sexuality or if you are two guys wanting a double bed.

If you book a single room then this is for single use and not for you to entertain guys in your room. So please book a double room if you want to take guys back to your room. When you take guys back to your room the hotel reception will normally ask the guest to provide details of his ID. This is for your safety, so please do not object as this is standard practice in other countries.

Our list of gay places is more extensive than in some other cities as a service to you so you know what to expect at each place so you are prepared and can select those you would like to visit and those you would be better to avoid.

Mor Kedi Cafe & Bar (20:00- 02:00). Address: Istiklal Cad. Imam Adnan Sok, No: 7 (3rd floor) Beyoglu. Mor Kedi is one of the most senior gay cafe bars in Istanbul. It is a place that get busy earlier than others gay bars from around 8.00 pm. Clients are mostly younger gays, but any ages are welcomed.

Chianti Bar (20:00-02:00) Address: Bale Sokak, No: 31/2 (2nd floor) Beyoglu. Istanbul. A friendly gay cafe bar opens earlier in the days but much busier in the evenings and around midnight. It operates as a café and then the music gets louder after around 9 pm when becomes more like a bar.

Chaplin Cafe & Bar (20:00- 02:00) Address: Istiklal Cad. Ipek Sokak 16, Kat 3, Daire 5 – Beyoglu. A gay cafe bar on the 3rd floor of the building close to Taksim Square. It attracts a younger gay crowd. It has a friendly atmosphere where you can talk to people as the music is not too loud.

Haspa Plus Bar (20:00- 02:00) Address: Siraselviler Caddesi, No: 14/1, Beyoglu. Haspa is among the most popular evening gay bars. There is a live Turkish pop music performance some of the days and is in the same street as Tekyon Club which is Istanbul’s busiest gay bar.

The gay clubs in Istanbul generally get busy after midnight with loud music which is a mixture of Turkish pop, western pop, and techno.

Tekyon Club (Open 23:00-05:00) Address: Siraselviler Caddesi, No: 63/1, Taksim, Beyoglu. The most popular gay club in Istanbul. Due to the size is much less crowded during the week but generally packed on Friday and Saturday nights. It has a space outside at the back for the smokers. Tekyon was originally a popular venue especially for local bears but now attracts a completely mixed crowd. The waiters are generally a little camp but very friendly in this bar. A male belly dancer and simple drag show performed at weekends can be fun to see. A club not to be missed if you are in Istanbul at the weekend.

Love Dance Point (Open 23:00 to 05:00) (Friday-Saturday) Address: Cumhuriyet Caddesi, No: 349 Harbiye, Sisli. This night club is located in Harbiye district and 15-20 minutes walking distance from Taksim Square so it is better to get a taxi which will cost about 5 Euros. It is open on both Friday and Saturday nights. Saturday is the busiest and there are some good shows usually. The entrance is around 10-15 Euro but included your first drink. The entrance is on a very narrow street, down the steps from the main avenue. If you take taxi from Taksim tell the driver that you want "Askeri Muze" which is the Military museum in Harbiye. The club is across the main street from the Askeri Muze building.

Generally, the places to be avoided in Istanbul are the following Club 17 which attracts young hustlers & amateur escort boys. Club Cheeky which is an after-hours night club open at weekend that attracts a mixture of gays, bears, rent-boys and transvestites.

There is a huge choice of place to dine in Istanbul. The food is generally very nice and healthy. Look for places to dine with your eyes and nose to see the food being eaten by other diners and if the customers are cute.

Firuzagha Hamam. Address: Cukurcuma Cd. No: 6 Cukurcuma, Beyoglu. A small old traditional Turkish bath house where you can have a Turkish massage by a local at a reasonable price. Ask the price and give the masseur a tip when you leave. The clientele are Turkish locals living in the area and no sexual activity is allowed. You can find most easily by walking down from Galatasaray Square which is in the middle of Istiklal street.

Cihangir Sauna. Address: Altipatlar Sokak, No: 14 Cukurcuma, Beyoglu. Located on a back street near the beginning of Cukurcuma street. It is not a traditional Turkish bath but has a sauna, some kind of a dark room, showers and a cafe-lounge area.

Aquarius Sauna. Address: Istiklal Caddesi, Sadri Alisik Sokak, 29/1 Taksim-Beyoglu. A modern venue near Taksim with a dry sauna, swimming pool, Jacuzzi and a small gym and full of rent boys. A place to be avoided.

These are the most historical Turkish hammam in Istanbul and recommended to experience the atmosphere of a real historical & traditions Turkish bath.

Galatasaray Hamam. Address: Turnacibasi Sokak No: 24 Beyoglu This hammam was used exclusively by men for almost 500 years. This all changed in 1963 with the addition of a small section for women. However, aside from this little addition, not much else has been altered. It was originally built in 1481 during the reign of Beyazit II and contains many pretty details, such as the intricate tile work at the entrance to the steam room in the men's section. One major feature here are the marble slabs where bathers can be massaged in semi-privacy rather than on the heated central navel stone. The admission price includes a full service, including massage. Admission fee is around 20 Euro (massage excluded)

Cagaloglu Hamam Address: Prof. Kazim Ismail Gurkan Cad No:34, Cagaloglu. Cagaloglu Hamam was built about 300 years ago on an area of 2834 sq.mt It is considered the last sample of its category and the architectural design is astonishing.

It is located in Sultanahmet, near the Grand Bazaar. This hammam built in 1584 was very popular among the Ottoman Sultans. It is considered to be one of the most important examples of 16th century Ottoman architecture.

Ayasofya Hurrenm Sultan Hamami is the most luxury and fairly expensive historical Turkish bath located at the very centre of historical Sultanahmet district, across from Santa Sophia.

The main shopping street is Istikal avenue which has lots of European designer brand store and Turkish stores. The side streets and inside some of the building have lots of smaller boutique shops.